New solution will be launched at Japan Expo, where Rakuten Europe is one of the strategic partners

Luxembourg/Paris, July 6th, 2022 – Rakuten Europe today announced that it will bring one of the top mobile payment solutions in Japan, Rakuten Pay, to France. The exclusive launch will take place at Japan Expo, a must event for all those interested in Japan culture and endless discoveries for novices – which will take place in Paris on July 14-17th.

Rakuten Europe has decided to launch Rakuten Pay at Japan Expo, as it is the biggest event in France dedicated to Japan lovers, and the largest in the world outside of Japan. And this will be the first year in a long-standing strategic partnership between the two organizations. 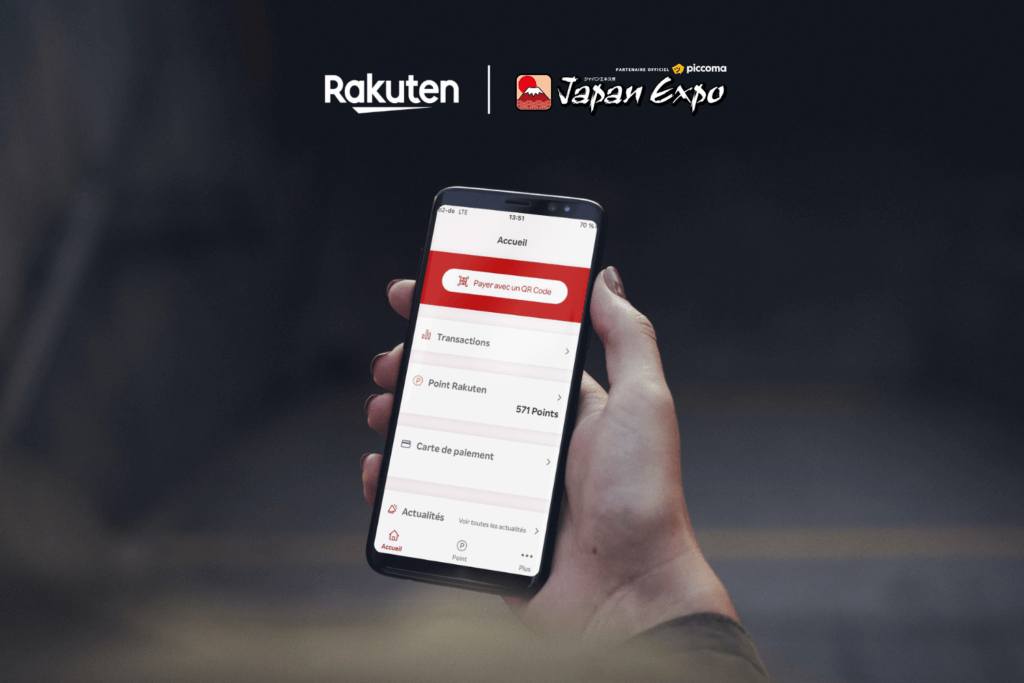 Rakuten Pay is a payment service in Japan that allows users to make easy payments via a smartphone app by registering a credit card or Rakuten bank account with their Rakuten Pay account. Supported by over 5 million locations across Japan, the app has established its position as one of Japan’s top mobile payment products and now arrives in France to offer a convenient purchase experience through a simple, state-of-the-art solution for cashless payments.

Rakuten Pay is a mobile QR Code payment app that provides a seamless checkout process with opportunities to save money with Rakuten Points, by earning & redeeming on other services within the Rakuten Ecosystem including e-commerce, fintech, digital content and communications, bringing value to customers through a unique loyalty membership program.

When making a purchase at eligible stores, users who are Rakuten members can make payments by simply scanning a displayed QR code and receiving Rakuten Points in return for every transaction. Members can further earn or redeem these points at eligible partner stores and Rakuten services. Thereby, they experience the benefits of the Rakuten loyalty program, whilst feeling confident and secure as no credit card information is shared during the whole process.

During Japan Expo this year, Rakuten will provide visitors with a unique opportunity to experience Rakuten Pay, by providing 500 welcome points when downloading the app, which can be used as a 5 euros discount at eligible vendor & partner booths straightaway.

To showcase the ease of use of R Pay, Rakuten has partnered with some of the most popular French Twitch Streamers, who will take their followers through a live shopping experience during the course of Japan Expo, allowing Japan lovers and their followers’ communities to experience a virtual tour of the event with their favorite influencer.

They will all be present at the  « Stream and Chill” booth, sponsored by Rakuten, for those interested in spending the day at Japan Expo with their streaming idols.

Rakuten Group, Inc. (TSE: 4755) is a global leader in internet services that empower individuals, communities, businesses and society. Founded in Tokyo in 1997 as an online marketplace, Rakuten has expanded to offer services in e-commerce, fintech, digital content, and communications to approximately 1.6 billion members around the world. The Rakuten Group has over 28,000 employees and operations in 30 countries and regions. For more information, visit https://global.rakuten.com/corp/.

Rakuten has been active in Europe for more than a decade and is constantly growing its footprint. The network of business units consists of more than 14 services, available in almost every European country, including Rakuten France, Rakuten TV, Rakuten Kobo, Rakuten Advertising, Rakuten DX, Rakuten Symphony and Rakuten Europe Bank among the main ones.

With Rakuten Europe’s head office in Luxembourg and offices in London, Dublin, Paris, Berlin, Barcelona and other major European cities, Rakuten is more than just a company, it’s a vision of a true Ecosystem.

Japan Expo is a cultural and popular celebration. Every year, Japan Expo has the honor of welcoming prestigious artists who come to meet the French audience. As the real pillars of the festival’s program, famous names of animation, video games, and manga come to take part in conferences, meetings, or signing sessions to exchange about Japanese culture.

Japan Expo aspires to celebrate with the public and the professionals exceptional careers, but also to put forward new talents in full development.

Since 2002, Japan Expo has been organizing the coming of Japanese artists. Each year, the festival team has renewed this commitment to the public: welcoming iconic figures and looking for new talents highlighted through conferences, signing sessions, masterclasses, or even live drawing…

Japan Expo is the 1st European festival dedicated to Japanese entertainment and culture and the 3rd exhibition in France behind Le Mondial de l’automobile and Le Salon de l’Agriculture. It gathered 252 510 people during its anniversary edition in 2019.