As part of its mission to inspire and empower people around the globe, Rakuten firmly believes in the power of sport to bring people and communities closer together. The company aims to leverage its digital expertise in the sporting world to enhance the fan experience at events, to bring innovation to traditional sports and to ensure the industry is future-fit.

By partnering with e|motion group to support the ATP MercedesCup in Stuttgart, WTA bett1open in Berlin and ATP Mallorca Championships for the next three years, Rakuten will provide groundbreaking digital solutions to fans on the ground and around the world – including a dedicated app for tennis fans. To kick off the new partnership, Rakuten’s logo will first be visible throughout the Mallorca Championships from June 19 to June 26.

A series of three dedicated apps, one for each of the tournaments above, to be released will not only allow fans to view live scoring, stats and figures, they will also serve as a hub for exclusive content, as well as ticket purchases and management. Another highlight of this digital solution dedicated to fans is the cashless payment option to pay for food and beverages on site at the tournaments through the Rakuten Pay app.

Users will also receive complementary Rakuten Points, Rakuten’s loyalty program, as a welcome bonus when downloading the Rakuten Pay app. These points can be redeemed for the latest movie releases on Rakuten TV, e-book bestsellers on Kobo, or for Rakuten Viber credit, or exchanged for shopping vouchers on Rakuten’s shopping platforms.

“The pandemic has created many challenges for professional sports events. We are thrilled to work alongside our partners to transform these challenges into tomorrow’s digital opportunities. Through joint innovation with e | motion, we aim to create meaningful and long-term connections with fans through three dedicated mobile apps that allow them to feel the court-side excitement of live events and deliver exclusive content and rewarding on and off-site experiences.”

“We feel extremely honoured and privileged to partner up with such a renowned and innovative company as Rakuten! This ground-breaking partnership is a showcase for innovation and digitalization of sporting events, not just in Tennis, but in the sports industry in general. And it is just the beginning! The launch of three apps in a very short time frame and in the midst of a global pandemic is a great achievement for the whole Rakuten and e|motion team as well as showing great collaboration and enthusiasm for our joint journey”. 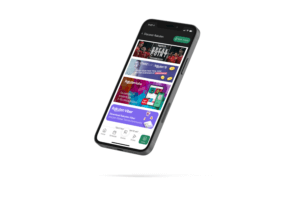 Combined with its expertise in mobile app development, Rakuten also brings to the partnership a deep sector knowledge in the sports and entertainment industry, especially in tennis, having delivered the official apps for both the Qualifiers and Finals stages of the Davis Cup by Rakuten.

The newly developed app for the partnership with e|motion is another important step towards the digital transformation of sports events, both small and large. It offers event organizers the ability to easily change the look and update content of their apps. It also allows for the personalization of visuals, languages and content via intuitive drag-and-drop functionality. Combined with the analytics available on various live dashboards, it enables partners to adapt their apps and content almost instantly depending on their audiences’ behavior and stats.

Rakuten has long valued the unique and impactful role sports play in society, and professional sport innovation plays a central role in its sports partnerships with legendary football club FC Barcelona, the NBA’s Golden State Warriors basketball team and the Davis Cup by Rakuten, as well as its long-standing partnership with the Rakuten Japan Open Tennis Championships, part of the ATP tour and the largest men’s tennis tournament in Japan.

As successful event organizer and trendsetter in sport marketing, e|motion group boosts its competitiveness through continuous development of events focused on tennis and thus also enhances its partners’ and costumers’ competitiveness, both nationally and internationally. Hence, the company generates added economic value for all participants.

Besides the MercedesCup in Stuttgart, e|motion group also organizes the ATP 500 tournament Erste Bank Open in Vienna, as well as the Mallorca Championships in Santa Ponca – a second ATP 250 grass court event. On the women’s tour, the company organizes the WTA 500 tournament bett1open in Berlin. e|motion group is managed by the two founders and owners Edwin Weindorfer and Herwig Straka.

Rakuten Group, Inc. (TSE: 4755) is a global leader in internet services that empower individuals, communities, businesses and society. Founded in Tokyo in 1997 as an online marketplace, Rakuten has expanded to offer services in e-commerce, fintech, digital content and communications to approximately 1.4 billion members around the world. Rakuten has over 20,000 employees, and operations in 30 countries and regions.