Menu
Shopping, Sustainability, and Social Causes – What Does the Future of Online Shopping and Brand Marketing Look like According to Gen Z?

Shopping, Sustainability, and Social Causes – What Does the Future of Online Shopping and Brand Marketing Look like According to Gen Z?

Luxembourg, Belfast, September 13 2022 – Gen Z has taken the world by storm – at least the digital world. But what do we know of Gen Z? A term applied by many demographic researchers, and according to Pew Research Center, Generation Z (in short: Gen Z) consists of people born between 1997 and 2012. Gen Z follows Millennials (born between 1981 and 1996) and precedes Generation Alpha.[1]

Gen Z is known to be the most racially and ethnically diverse generation yet. Due to the Covid-19 pandemic, wars, and economic uncertainties following the Financial Crisis of 2009, Gen Z looks into a future more uncertain than previous generations have experienced. According to the Annie E. Casey Foundation, Gen Z’ers are more socially minded than previous generations and focus on seven key issues: healthcare, mental health, higher education, economic security, civic engagement, race equity, and the environment.[2]

And as true digital natives, who have been exposed to the internet, social networks, and mobile systems since the youngest age, Gen Z has access to many platforms to raise their voices and demand change.[3]

In collaboration with Rakuten Insight Global, Rakuten Europe has recently conducted an online survey among 1,800 respondents aged 16-25 in France, Germany, Spain, Japan, the U.K., and the U.S. to find out about this generation’s shopping preferences and trends.

How to reach Gen Z effectively through ads:

What influencers should do to speak effectively to their Gen Z audience: 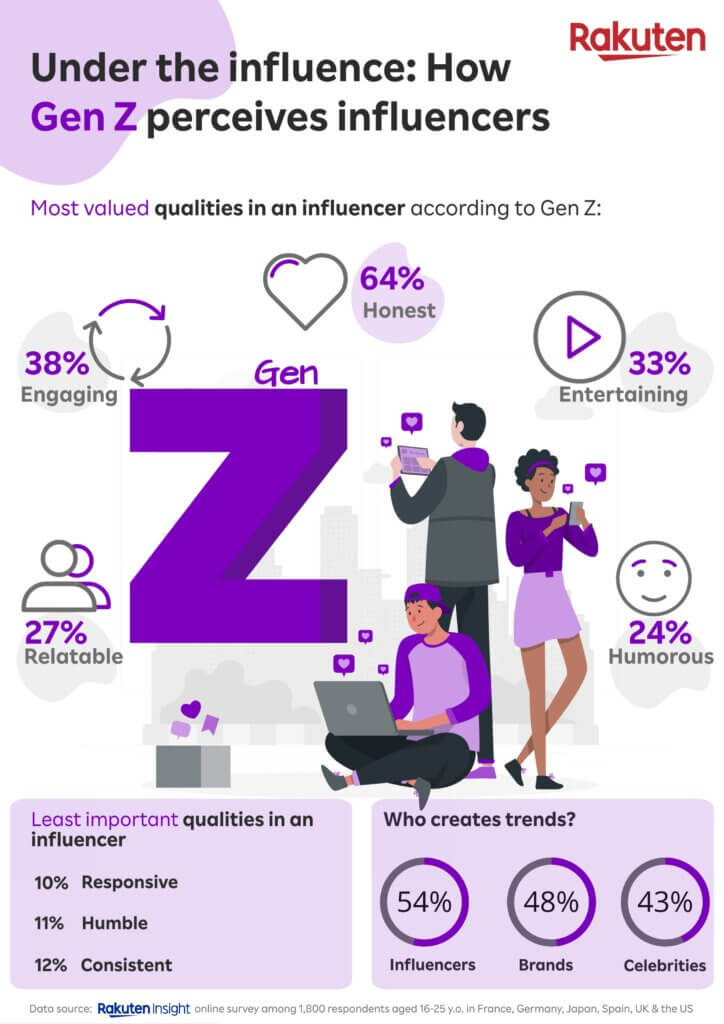 Is sustainable shopping really increasing among the young generation, that is often associated with the ‘Fridays For Future’ Movement?

As the BCC wrote in a recent article, Gen Z has been given a louder voice through technology, and the generation is unafraid to use it. It seems that social activism has become a part of Gen Z’s identity and their driving force to demand change in society and from companies. While the generation might seem active on social media platforms or on demonstrations to raise their voices, how important is it that brands and companies also care for social causes and how should brands and companies contribute to social causes? 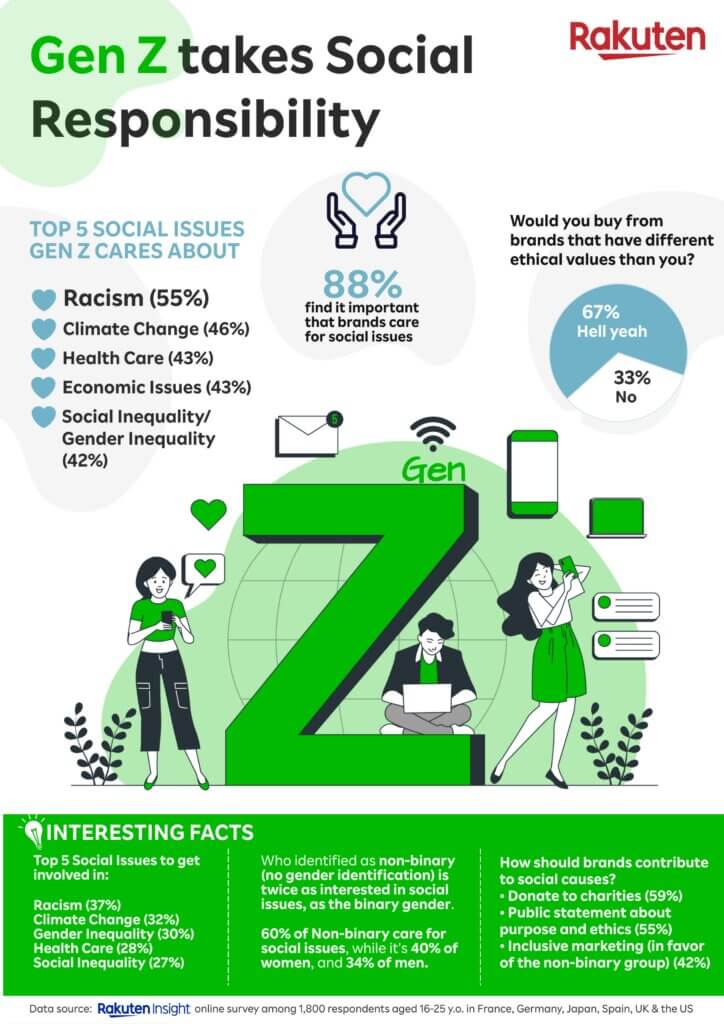 Rakuten Group, Inc. (TSE: 4755) is a global leader in internet services that empower individuals, communities, businesses and society. Founded in Tokyo in 1997 as an online marketplace, Rakuten has expanded to offer services in e-commerce, fintech, digital content, and communications to approximately 1.6 billion members around the world. The Rakuten Group has over 28,000 employees and operations in 30 countries and regions. For more information, visit https://global.rakuten.com/corp/.

Rakuten has been active in Europe for more than a decade and is constantly growing its footprint. The network of business units consists of more than 14 services, available in almost every European country, including Rakuten France, Rakuten TV, Rakuten Kobo, Rakuten Advertising, Rakuten DX, Rakuten Symphony and Rakuten Europe Bank among the main ones.

With Rakuten Europe’s head office in Luxembourg and offices in London, Dublin, Paris, Berlin, Barcelona and other major European cities, Rakuten is more than just a company, it’s a vision of a true Ecosystem.